I first picked up a guitar in the late 1980’s, aged 13 or 14. I taught myself chords from a book and spent hours everyday listening to records and watching video.

After a couple of years, at my parent’s insistence, I took some lessons and was taught the basics of blues improvisation and picked up some new influences like Hendrix, Zeppelin and Johnny Marr. I also passed enough grade exams to get through college and university.

Over the years I have played in many different bands (both covers and original) – starting out in the local pub and getting as far as New York City!

In the early 2000’s I quit my job and began teaching full-time and have since continued to do so. 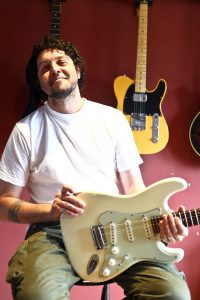 Based In Stone, Staffordshire

I teach from my home in Stone.

All lessons are currently done via Skype.

Lessons tailored to each student.

Learn how to get the most from your guitar.

I have taught both 1 to 1 and in the classroom. All ages and abilities welcome. Full DBS Cert.